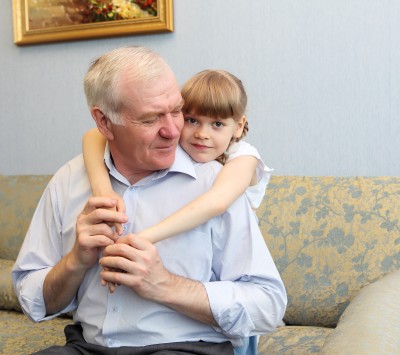 It is probably true that I have put him on a pedestal far beyond what he deserves, as a mere human, and I certainly know that he would say so himself(!), but, nonetheless, the memory of him has helped me through times when there is confusion in life. And for that, I thank God that I had the chance to know him and be loved by him.

I remember my grandparents’ house. It was a looooong house. At least, it seemed so to a little kid. I used to come in the front door and go straight back to the spot where my grandpa would be sitting in his black rocking chair. I would climb up in his lap and snuggle close. It was as if he was there waiting for me.

My grandpa was Swedish and spoke with the Swedish brogue, unable to say “This, that, and the other thing.” I would playfully ask him to say it so I could hear him say, “Dis, Dat, and de udder ting.” He would smile and I would smile. I would try to teach him to say the “TH” sound and he would laugh. You know, I don’t remember any other conversation. I just remember his big hands and how he would scoop me up close to him, like a bear cub. I would play with his medic alert necklace (and sometimes his chest hair and his mustache) and he would smile. I would smile.

So much was said and none of it was verbal. It was those eyes! He would look deep into my eyes and I not only saw LOVE, but I felt LOVE and felt LOVED. I would stop peering into his eyes long enough to curl up in his bosom. I daresay his hands were big enough they seemed to encompass my whole self and I would still feel loved!

And, so, my grandpa taught me that love does not require words, and not only that, but sometimes speaks louder when there are no words.

My grandpa had Type II diabetes (adult-onset). One day my family and I went to a concert and I was incessantly running to the drinking fountain (and then to the bathroom). I knew that I was being naughty by requesting to get a drink of water, and I tried soooooooo hard not to get up to get a drink, but I felt as if I was dying for a drink.

The reality is that I had Type I (juvenile-onset) diabetes and the extreme thirst and body weakness was a sign of this diabetes. My grandpa was with us at that concert and expressed his concern about me to my mother. He had learned enough about his disease to know that something was wrong with his little granddaughter.

My mother scoffed at the advice and was reluctant to have me tested, but my mild-mannered (or at least so he seemed to me!) grandpa kept insisting until she had me tested so that he would stop pestering.

My grandpa was right and that day, he taught me that sometimes you have to make waves, especially when it came to saving his little granddaughter’s life. Hey – Grandpa – I’m still alive!

When my grandfather was dying, a year or so later, he asked for me. He was in the hospital and sent word to find me and bring me to him. I didn’t know what an honor that was, because he was my grandpa. There wasn’t anything complicated to that relationship. I didn’t really understand what death was at that time and I didn’t know that he was beckoning me to say goodbye to me.

I went into the room and my grandpa had all these weird tubes coming out of every orifice, it seemed. He couldn’t talk, but I saw those eyes. Already, we had that language without words, so it didn’t bother me that he couldn’t talk. And, somehow, in my naiveté, I thought that meant I couldn’t talk!

It was a short visit, really, but my grandpa took my little hand and brought it up to his lips and he kissed it. As a response, I took his hand and kissed it (in between IV tubes and the like). He started to laugh, restrained by his weakness, but his eyes chuckled, unrestrained.

That is the last time I saw my grandpa. He died that night. I scarce can remember that moment or re-tell that story without tears in my eyes.

That day, my grandpa taught me that Love is timeless, it goes on beyond the restraints of death and when we feel unloved, we can remember even the love of those who passed before us, and still feel their love as strong as it was that day.

Grandpa’s wife, my grandma, was a feisty woman. Oftentimes, I have been told that I remind people of my grandmother, hence I have sometimes said “I am my grandmother’s granddaughter.” I realized, later in life, that she had a sweetness, but it was beneath that “Do the right thing” and “Get it done” that used to seem so evident when I was a little girl.

I realize that grandpa knew I needed someone to look out for me when he left this world. I realize, in hindsight, that that baton was passed to my grandma and she became particularly involved, to the best of her ability, to watch over me. She lived many years after my grandpa, long enough to pass that baton on to my husband. Even in her most disabled stated (after a stroke), even unable to lift her head to look me in the eyes, she was still carrying on Grandpa’s wishes and watching over me.

That day, Grandpa taught me that love does not walk the path alone. It often delegates to the next person when we are too weak, in our humanness, to walk that path. But, Love doesn’t walk alone, it always holds out its hand and it teaches us to hold out our hands… Love and be loved my friend.