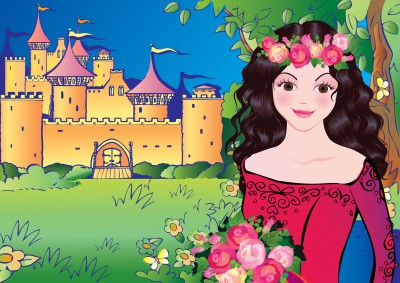 Reframing a View on the Consequences of Actions

A long, long, time ago (these stories do start like that, right?), there was a beautiful young damsel. We will call her, “Damsel.” She lived in a fortress called the “Fortress of Fantasy” (“Fantasy,” for short) and she was quite happy there, having just arrived. She had been found in another village where she was not well cared for and was “rescued” by the people of Fantasy.

There was another fortress, across the field, called the “Fortress of Bubbles” (“Bubbles,” for short). The people of Fantasy did not like the people of Bubbles. In fact, they blamed Bubbles for the treatment that Damsel received in the village that she had come from, so she felt that she must be extra-safe in Fantasy.

At first, everyone told her how much they loved her, especially the Queen, and she was so happy to be loved, sucking it in like a sponge. She liked giving hugs and love to other people in Fantasy.

After a couple of weeks, she noticed a dark cloud. She wasn’t sure if it had always been there, or it crept in out of nowhere. It was uncomfortable, but Damsel tried not to think about it. She also noticed that the wrestling that her friends liked to do with each other started to get a little more boisterous. She tried to stay away so she wouldn’t get accidentally hurt. Her friends teased her a little bit because she did not want to wrestle.

That dark cloud kept getting darker and her friends seemed to get tired of wrestling and started looking for other ways to express their energy. They had been at war with Bubbles, and decided that they would go attack Bubbles. Damsel didn’t understand this and it made her feel confused and a little unsafe. She tried to spend more time with the puppies and not complain, but soon it bothered Damsel so much that she wondered if she should move out. But, where would she go and if she left, wouldn’t all her new-found friends think she didn’t love them?

One day Damsel mentioned this struggle that she had been having. She mentioned it to all her friends. She figured that since the rules in Fantasy had always allowed for open discussion and wrestling, that surely she could express her concern.

A few hours later, Damsel found herself alone with the Queen who had become quite upset with her and started to wrestle. Damsel didn’t understand because everyone knew, especially the Queen, that wrestling made her uncomfortable. Then, all of a sudden, Damsel found herself falling out of the top story window of Fantasy and landed hard on the ground outside of Fantasy.

A couple of her friends tried to come out to help her but were too afraid of the Queen to proceed. The Queen did not look concerned but rather, threatened Damsel to get back inside Fantasy. Damsel was so scared, she couldn’t even respond and didn’t know who to trust. She found herself taking her eyes off Fantasy and looking toward Bubbles.

As she was gazing at Bubbles, she noticed some people coming toward her. She knew that Bubbles was the enemy and she was told not to trust them, but she kept looking over at Fantasy and it scared her that she may fall out of the window again and be harmed. She decided to let the people of Bubbles carry her into their fortress. She didn’t see that she had that much to lose, as long as they didn’t harm her or allow her to fall out any windows. A little food and bandaging would go a long way.

Instead, what she found was such peace, love, encouragement, and lots of puppies, kittens, pink bows, cotton candy and rainbows. And, no one made fun of her for liking these pretty things.

Damsel was still sad for her friends who lived in the Fortress called Fantasy, but she found that the true definition of peace and love existed within the Fortress that was called Bubbles. The people of Bubbles also helped her to realize that she didn’t have to stay there, but had many places where she could find a soft spot to land, a safe place where she could live happily ever after… which she did.