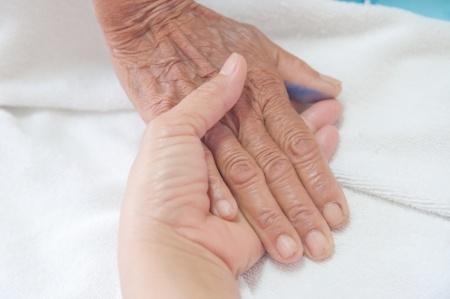 Even as I write this, I tear up at the memory of how much I took my grandmother for granted.

As a child, I would walk, no, run, into her house and go straight back to the rocking chair where my grandpa was sitting and climb up in his lap. My grandpa was my hero. Now I look back and I’m glad that I spent the time that I did with him because he left us when I was only eight. And, yet, I realize that my grandma longed for that same attention.

She was not always easily understood. Yes, she was respected. The community respected her. She seemed to be more understood by the community than even her own family, at times. Claims of her senility, toward the end, were widely overstated. How do I know that? I know that because she played people by feigning that she was not attentive when she was. It was her way of knowing what was going on and using that to protect the ones that she loved.

She knew how to read people. If it were not for that gift, I would fear that she would not know that I loved her as much as I did, even if much of that love blossomed after her death. And, yet, she knew me better than I knew myself.

Oh, she was not necessarily the easiest person to get along with, having a belief in truth that would sometimes seem to cause problems for those around her. Now, as I look back on my own life, and the opportunity that I turned down, for wealth beyond belief, at the risk of truth, I realize that that is my greatest gift from my grandmother.

Truth has a cost. It cost my grandmother her life, at the spout of a teapot. Oh, she lingered for many years, but she was wise to the cost of that truth.

Truth hurts. It is a deeper, searing pain than cannot truly be articulated, and yet, there is a strength that abides with the knowledge that one can walk through that pain and come out on the other side.

I don’t know the quantity of times that my grandmother paid, to remain true to truth, but paying with her life was an ultimate cost. And, yet, she lived with ridicule at the cost of that truth.

I understand, now, that that cost cannot be avoided. The only way to avoid the pain that comes with truth is to decide not live a life of truth, and, for me, that is too high of a cost. Obviously, for my grandmother, it was also too high of a cost. She refused to pay that.

I have seen many sacrifice truth for the cost of money, to save a reputation, to sacrifice another life (or at least attempt to), to cause dissension in families and communities. Yet, my grandmother did not do that. Neither will her granddaughter.

Oh, I do not claim that everyone liked my grandmother. I’m sure that there might have been those who would wish that she wouldn’t show up at the community get-togethers, with her propensity to share exactly what she thought, especially when she saw others being mistreated.

But, when I remember how she would donate her time to play the unforgivable honkey tonk music at the Mission, for those underprivileged souls, and when I remember that there was no person beyond reaching with love and human kindness, as well as food and clothing (no matter what the sacrifice), I realize that even though the cost of truth is a high cost, a painful cost, that there is no other place that I would rather be.

When I look at that and the cost that my grandmother paid, and how I have been saved, so far, from that cost of my own life, I am thankful to be able to say that I am my grandmother’s granddaughter. And, somehow, I think she knew that, even when I didn’t know myself.

Goodbye, dear grandma. And know that no matter what the cost, I will continue where you left off, not just because of you, but because of what you believe and I share that because it is worth sharing and protecting for the sake of all people. You did not die in vain. And neither will I.