I think about this quote often. Probably daily. I can still see the face of Rodney King as he pleaded with the people of Los Angeles to stop the rioting (see: Los Angeles Riots, 1992), stop the looting, stop the killing. I was there pleading with him, in my heart, watching my beloved Los Angeles being torn apart by hatred and venom. Here was the man so brutally beaten by officers of the Los Angeles Police Department and rather than choosing to be vindictive and spewing his, by some standards, deserved-venom on the whole of the city, he asked the city to stop rioting! He, the victim of heinous behavior told us, Los Angeles, that he didn’t require that type of vengeance on his behalf! Now, admittedly, I do not know Rodney King personally. I do not know all of his accolades. I do not know all of his faults. But, I don’t need to know this, because, simply put, Rodney being “human” is, and always has been, enough for me and what he said that day, has not left me since.

Do I have a reason to be upset about the riots? Yes, probably so, considering I lost a good friend that day. A friend who decided that he was going to go into the thick of the riot zone and try to make a difference, try to love the people, yes, the rioters. This friend of mine lost his life, as a result, killed by two people as they were looting a dollar store, beaten to unconsciousness and eventually, death, never to be revived, never to see the light of day. Again, I hear Rodney King’s plea and I echo it, “Can’t We All Just Get Along?”

In a world where bickering has become commonplace (probably always has been, to some extent), I watch the bullying that goes on, using the internet as a means to attack people, and I ask myself if we have really evolved past the sins of our forefathers. Have we really accepted that we should treat people equally, kindly, and love one another? Have we realized that humanity should be enough of a common ground and keeping track of other people’s wrongs and bad attitudes only shines a light on our own, more grievous wrongs? 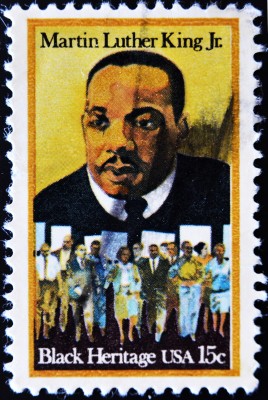 Does Humanity Need A Definition?

“An individual has not started living until he can rise above the narrow confines of his individualistic concerns to the broader concerns of all humanity.”
Dr. Martin Luther King, Jr.

I have been asked, many times, who inspires me, and without hesitation, I say, Dr. Martin Luther King, Jr. His faith, his calmness, and yet his spirit of fighting for what he believed in with a strength of character and persistence that would have even his enemies in awe, was still meted with the gentleness of a man who knew how to love humanity and desired to change his community to share in that EQUAL love for humanity. I aspire to be like this great man, who, even in death, could not be stopped from sharing his love generations beyond his time here with us.

Let’s take a look in the mirror, shall we? Do we really view each other as what we are, flesh and blood? Or, do we lose points for skin color, sexual orientation, religious affiliations, and “being too nice.” If loving people puts me lower in your list, I accept the badge, because when we are knocked down, we are closer to the others who have been knocked down before us, like Rodney King, like Dr. Martin Luther King, Jr. and many others, and we are not alone. We are also at a vantage point to start bandaging their wounds, and Mr. King, maybe we won’t *all* get along, but we can start right where we are at, even if that is after we have been brutally kicked down, as well.

1 comment… add one
Who Actually Popped The Bubble?
My Wish For You….